Where is the Murray-Darling Basin?

What is the Murray-Darling Basin?

The Murray-Darling Basin is one interconnected system of rivers, the largest in Australia. It spans an area stretching 1 million square kilometres, which is the size of France and Spain put together. The Murray-Darling Basin includes the Murray River, which runs along the border between Victoria and NSW. It also consists of the Barwon-Darling River and its tributaries, which have headwaters in Queensland and northern New South Wales and flows south through New South Wales before meeting the Murray River near Mildura. The Northern and Southern Basin meet at the Menindee Lakes in NSW.

The Murray-Darling Basin accounts for 14% of Australia’s landmass and crosses 5 States and Territories. The basin includes parts of the states of South Australia, Victoria, the Australian Capital Territory, New South Wales, and Queensland. It serves as a primary source of water for Canberra and Adelaide and many rural and regional cities and towns. The region is defined as a basin because all the system’s rivers run to a common point- the Lower Murray.

Where in Victoria is the Murray-Darling Basin?

As the map below shows, the Southern part of the Southern Basin covers almost half of Victoria’s landmass. From the towns of Mildura and Albury down to the south of Seymour and Horsham, the Murray-Darling Basin in Victoria covers river systems such as the Kiewa, Ovens, Broken, Goulburn, Campaspe, Loddon and Wimmera rivers. The water flows through Victoria into South Australia, down to the Lower Lakes and Coorong and out through the Murray mouth into the Southern Ocean. People of the Murray-Darling Basin

The Murray Darling Basin is significant to Traditional Owners and Aboriginal Victorians, each with diverse aspirations for water and land management and practices. The Victorian Government has invested in a range of initiatives supporting Traditional Owners across the state to enable self-determination for water planning, management, ownership, and access.

In northern Victoria, there are two major irrigation areas in the Goulburn-Murray region and the Victorian Mallee. The Goulburn Murray Irrigation District (GMID) is the largest irrigation district in Australia comprising 15,000 properties over 9,950 Square kilometres. The gross value of irrigated agricultural production in the GMID is around $2.1 billion per year representing approximately 24% of the total value of Victorian agricultural production. The main enterprises are cropping, dairy, mixed grazing, and horticulture. There are major food processors located in Shepparton and the region supports a population of 170,000 people.

How the water works

Understanding how water works allow us to plan for it to provide water to our communities, industry, and the environment.

Most of the rivers in the Murray-Darling Basin start in the Great Dividing Range. This is a series of mountains on Australia’s east coast, which stretches from the north of Queensland, through New South Wales and into Victoria.

The southern Basin (the River Murray and its tributaries) has higher and more regular rainfall than the northern Basin. It also has several large public dams that can store water, which can be released when conditions are drier.

Most of the large Victorian tributaries to the Murray are regulated by storages and weirs, including Lake Eildon, Lake Eppalock and Lake Nillahcootie on the Goulburn, Campaspe, and Broken rivers respectively. Irrigation channels divert water from these regulated rivers throughout many parts of the system. Similarly, the Wimmera River is regulated by a series of storage and a network of pipelines to help supply water to users. There are also unregulated rivers in Victoria that flow into the Murray, such as the Kiewa River.

In contrast, the northern Basin (the Barwon-Darling River and its tributaries) has drier and more variable weather patterns, with extreme dry times and floods. The public storages are generally smaller than in the southern Basin. River flow is more dependent on runoff after regular rainfall than releases from dams, and the ecosystems, communities and industries have adapted to the ‘boom and bust’ nature of the climate.

The northern Basin starts in the Queensland Ranges, where gravity pulls the rainfall down and off the mountain into surrounding creeks, rivers, lakes, and groundwater. Some of this water travels down into the Barwon-Darling River, eventually connecting with the Murray River.

In the southern Basin, creeks and rivers flow into the Murray River. Inflows to the Murray River upstream of Albury, including the Kiewa river, are shared equally between NSW and Victoria. Downstream of Albury, all inflows from Victorian tributaries (Ovens, Broken, Goulburn, Campaspe, and Loddon) are 100% Victorian water. In NSW, inflows from the Murrumbidgee and Darling (when Menindee is in NSW control) are 100% NSW water. However, when the Menindee lakes are in MDBA control, inflows from the Darling River are shared equally between NSW and Victoria. For more information on water sharing between the arrangements visit the MDBA website.

Victorian inflows to the Murray are captured in weir pools and Lake Victoria, where possible, to be allocated to entitlement holders, or delivered to South Australia as Victoria’s contribution to the South Australian entitlement flow. Groundwater supports a significant amount of agriculture, stock and domestic use and even urban supplies in the Basin. Groundwater quality varies across Victoria, with good quality and quite reliable groundwater in the northeast, but lower quality groundwater with limited applications further to the northwest. 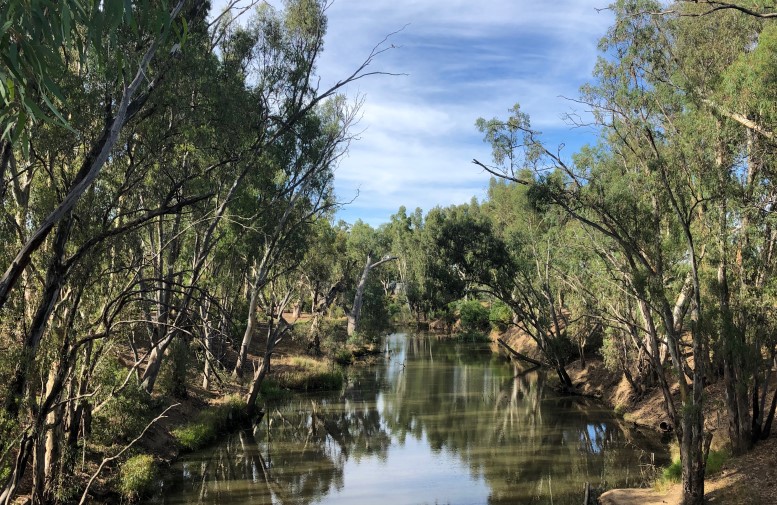 How the Basin was formed