The majority of Victoria’s groundwater is contained in geological basins; each basin contains layers of sediment which form Victoria’s aquifers.

The Victorian groundwater basins lie to the north, south and west of the central highlands. The map below highlights the geological basins. 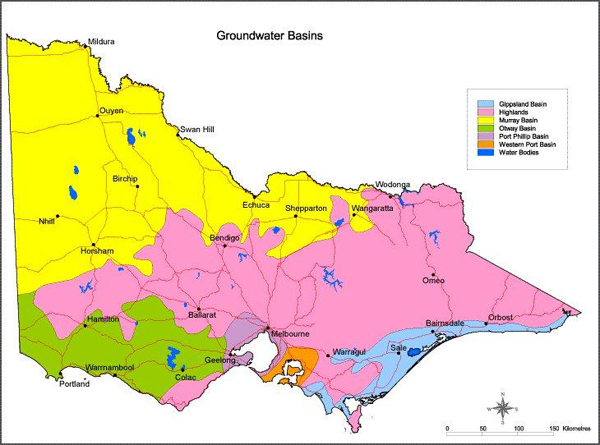 Groundwater is also found in the fractured rock of the highland areas, however the rate and volume of water that can be extracted is highly variable.

Victoria’s aquifers are defined within the Victorian Aquifer Framework. The framework provides a consistent approach to defining aquifers across the state.

There are 15 aquifers represented in the aquifer framework, which occur at various depths and locations. To identify the major aquifers in your area visit Groundwater resource reports.

Groundwater is primarily used in Victoria for irrigation of crops and dairy farms; however, it is also used to supply water for domestic and stock purposes, power generation and for town water supply.

Figure 2 shows how groundwater is used for different purposes.

In areas where surface water is unavailable or cannot provide security of supply, groundwater plays an important role in sustaining communities and the local economy. Approximately 70 towns across Victoria rely on groundwater as either a supplementary or primary water supply.

Groundwater and the Environment

Groundwater plays an important role in supporting aquatic and terrestrial ecosystems. Natural ecosystems that rely on groundwater to meet all or some of their water requirements are known as Groundwater Dependent Ecosystems (GDE). Such ecosystems may include wetlands, rivers, vegetation, estuaries and cave systems. The way in which groundwater supports these environments is depicted in Figure 3.

Extraction of groundwater may reduce the water available for GDEs, particularly in unconfined aquifers. The threat to GDEs from groundwater extraction is managed by assessing the potential impacts of groundwater licence applications.

In considering an application to take and use groundwater, the Water Act 1989 requires the Rural Water Corporations to consider any adverse effects that the extraction is likely to have on the environment.

In order to support consistent decision making across the state, DELWP provides guidelines for assessing the potential risk to high value GDEs from groundwater licence applications. The guidelines are available on the Victorian Water Register website