To maintain and improve the important values that riparian land supports, management actions (e.g. livestock management, revegetation, weed control, willow removal) are undertaken across Victoria.  An ongoing challenge is to evaluate the outcomes of this investment to guide improved practice and inform state and regional waterway planning, evaluation and reporting. 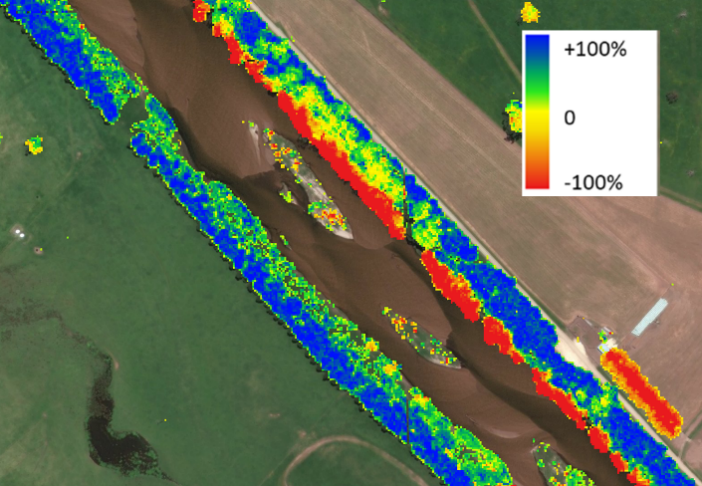 Snowy River, East Gippsland showing changes in fractional canopy cover between 2010-2018 as a gradient from red (100% decrease – likely due to woody weed removal), yellow (no change), to blue (100% increase – due to revegetation).

Light Detection and Ranging (LiDAR) was first used to assess riparian vegetation at broad spatial scales in Victoria for the 2010 Index of Stream Condition (ISC). The ISC provided snapshots of the condition of Victoria’s rivers in 1999, 2004 and 2010. In 2010, aerial LiDAR replaced on-ground sampling to assess the Streamside Zone ISC sub-index across the state, which provided a more consistent and comprehensive data collection method.

The Stream Change Assessment project (SCA) re-sampled a subset of ISC river reaches using LiDAR from 2018 to 2020, to assess changes in woody vegetation since the 2010 ISC capture. LiDAR was recaptured at 141 of the 1,040 reaches included in the 2010 ISC. This represents ~3,424 km of stream length, or ~13% of the ISC network. These reaches are located across nine catchment management authority (CMA) regions (Melbourne Water is undertaking its own LiDAR assessment for the Port Phillip and Westernport region). Areas for recapture were selected in consultation with CMAs guided by their needs for information to evaluate change due to their past riparian management and/or to guide their planning.

Results were summarised for fractional canopy cover, canopy height, vegetation width and fragmentation. These represent a subset of the metrics that were derived as part of the SCA project. ISC Streamside Zone scores were also calculated and compared between the two assessment periods. Notably, the woody weeds component of the Streamside Zone score was not updated for the second assessment, so results do not account for any changes due to woody weed loss or expansion. Incorporation of woody weeds into the new data will require substantial further work, drawing on CMA woody weed management data and manual interpretation of aerial imagery.

While some substantial changes at certain reaches were evident, they were generally small at statewide and regional extents. This was not unexpected because: