Building on the great work achieved so far by Friends of Emu Bottom Wetland Reserve and Hume City Council.

‘Restoring the Natural Glory of Jacksons Creek’ project builds on the great work achieved so far by Friends of Emu Bottom Wetland Reserve and Hume City Council and is strengthening the friends’ group and other partners who are supporting the restoration work.

Overall achievements to date include:

Significantly, the project is preserving the Bora Rings (or Sunbury Rings), an important Aboriginal site for the Wurundjeri Woi Wurrung Cultural Heritage Aboriginal Corporation. The Bora Rings are traditional ceremonial grounds for Aboriginal people and are a raised platform of dirt arranged in a circle. There are three Bora Rings in the Jacksons Creek area, quite close together, between 10 metres and 25 metres in diameter. In addition to on ground efforts the Narrap Wurundjeri Rangers have also rediscovered traditional ecological knowledge through traditional burning programs for land management.

High levels of land clearing, overgrazing and the introduction of pest plants and animals to the Maribyrnong Valley has led to poor water quality and loss in biodiversity. Over time, the deterioration of the natural habitat has impacted native animal and indigenous plant populations. Recent urban development and population growth in the Sunbury area has also contributed to biodiversity loss. 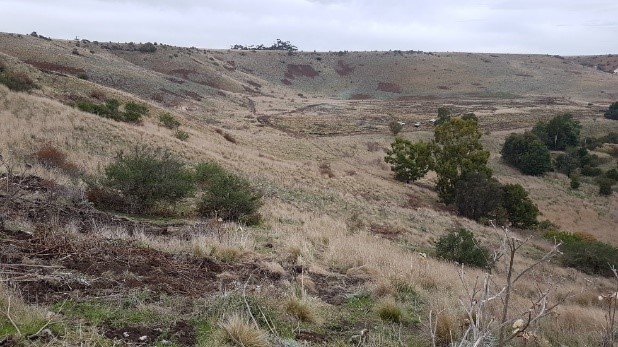 Our collaboration with Robert Hall and the Department of Environment, Land, Water and Planning project has revitalised the Friends of Emu Bottom Wetlands Reserve. The extension into a new area south of the existing reserve boundary has been tackled with great enthusiasm and has allowed us to recruit a number of new members. Community participation and ownership of a project ensures its ongoing success.