Seawater is drawn into the plant and diffused back into the ocean through intake and outlet structures connected to two tunnels.

To protect marine and coastal environments, the intake and outlet were tunnelled under the sand dunes, beach and seabed. They exit the seabed beyond sensitive marine areas.

The intake structures draw in high-quality seawater with as few impurities and particles as possible. This makes it easier to filter and treat the water.

The two intake structures are connected by vertical risers to a 1.2 km underground tunnel. They draw water in so slowly that small fish and other species can easily swim in, out and around the structures. Grilles prevent larger sea animals from entering.

Due to the open ocean currents of Bass Strait, the salt content in the mixed water will drop back to standard seawater concentrations within a very short distance of the diffuser nozzles.

The design and location of the intake and outlet structures were determined through research on the marine environment that included:

The final design passed a comprehensive approvals process, including review by the project's Independent Reviewer and Environmental Auditor, and final assessment by the EPA for compliance with the EPA works approval.

The seawater concentrate discharge must meet the requirements set by the EPA according to EPA licence conditions. Evidence from other desalination plants suggests that the small area in which the discharge is most concentrated will provide habitat for salt-tolerant species such as mussels, sponges, and some ascidians.

The intake structures are about 500 metres away from the outlet structures. 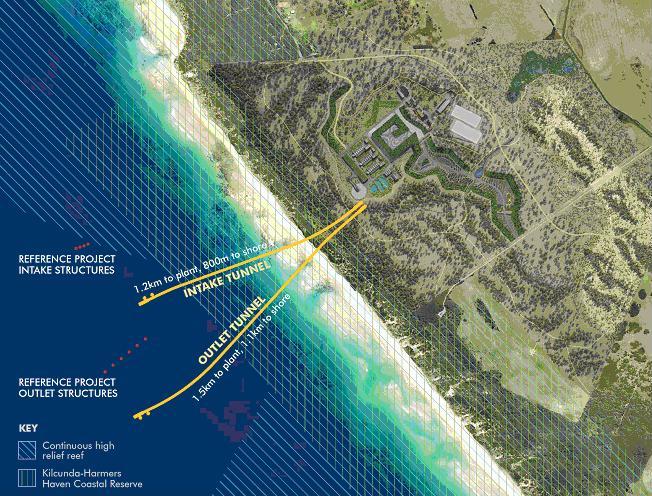