Connecting the plant to the water grid

Water from the desalination plant at Wonthaggi is transferred to Melbourne and regional areas via a new, 84-kilometre underground pipeline.

Water from the desalination plant at Wonthaggi is transferred to Melbourne and regional areas via a new, 84-kilometre underground pipeline.

The pipeline connects to Melbourne's supply network at Berwick and then flows into Cardinia Reservoir or direct into the pipe system.

In Cardinia Reservoir the water mixes with catchment supplies and can be transferred through Silvan Reservoir to the broader network, depending on how storages are managed.

Water retail areas that could receive some desalinated water during the operation of the desalination plant, depending on system management and local requirements, include Greater Western Water, South East Water and Yarra Valley Water.

The two-way pipeline means that if the desalination plant is not running, water can be supplied from Cardinia Reservoir.

It has delivery points so South East Water, South Gippsland Water and Westernport Water can also access Melbourne supply system water (including desalinated water) to use if and when required.

This represents an 84-kilometre extension to the Victorian water grid and increases water security for these areas.

Most of the transfer pipeline was manufactured by Victorian-based company Tyco at its Somerton factory. The pipe is 1.93 metres in diameter and each section weighs about 13 tonnes.

It is designed to deliver up to 200 billion litres of water a year should the plant be expanded.

Air vents and scour valves along the pipeline allow air into the pipe when the pipe is draining and out of the pipe when it is filling with desalinated water.

Two surge tanks control the rate of pressure changes in the pumping system. They are located at Kilcunda Ridge and St Heliers Gurdies Road. The state provided $5 million to install a separate pipe from the desalination plant to the South Gippsland Water network to secure the water supply of Wonthaggi, Inverloch and Cape  Paterson, if required. 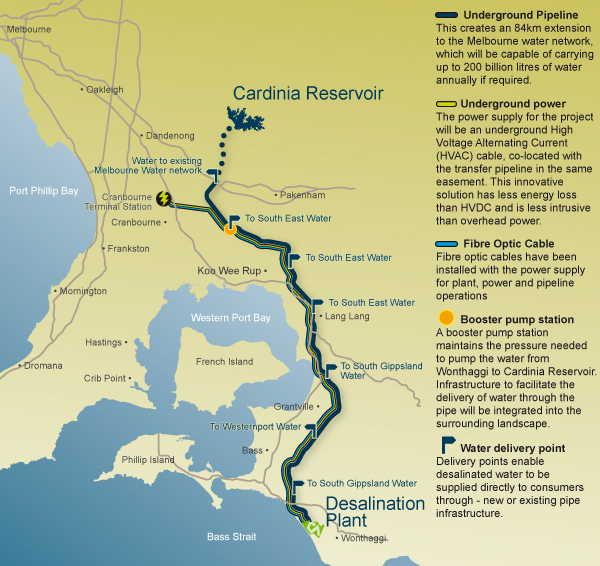