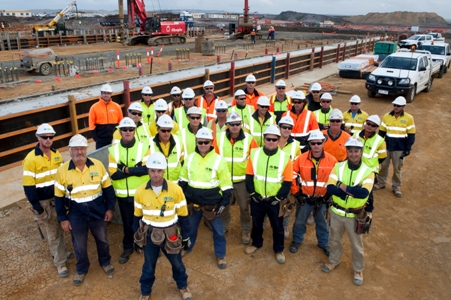 About 10,500 people worked on the project during construction, with the workforce peaking at around 4,500 at one point.

Direct and indirect jobs were created through jobs on site and contracts awarded for products and services.

There are about 50 full-time equivalent jobs involved in operating the plant and more contract positions to support operations, maintenance and servicing.

The project awarded about $1.2 billion worth of contracts during construction, two-thirds of these were awarded to Victorian companies and about three-quarters to Australian companies.

Jobs and sub-contracts went to local and regional people. Businesses from Wonthaggi, Bendigo, Dandenong, and other regional areas won contracts.

The construction phase boosted the local economy with demand from a new workforce living and working in the area for products from local suppliers and business for retailers, cafes, fuel suppliers, caterers and other service providers.