To select the most appropriate site for the project, a large-scale feasibility study was undertaken to identify the Wonthaggi site. Cleared farmland behind coastal dunes and Williamsons Beach in Gippsland became the site of Victoria's desalination plant.

The Wonthaggi site was selected because of:

The site offers easy access to the open ocean of Bass Strait for water intake, and circulating water that will disperse concentrate.

Located to the east of Melbourne, the Bass Coast is well positioned to link into Victoria's water grid, which generally moves water from our catchments in the east to cities and towns in the west.

Sites on the bays were rejected because of lower source water quality and potential issues with discharge into relatively poor circulating waters.

Surf Coast sites would have required significant and expensive infrastructure upgrades to transfer water to the city.

A full copy of the feasibility study can be found here (PDF, 13.9 MB) 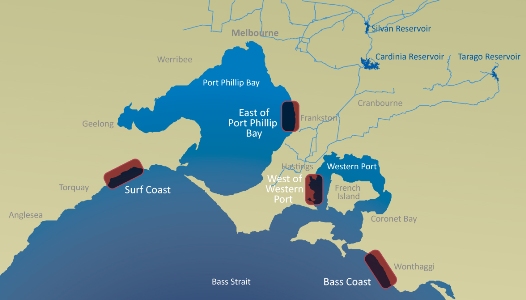